I Married a Psychedelic Vampire 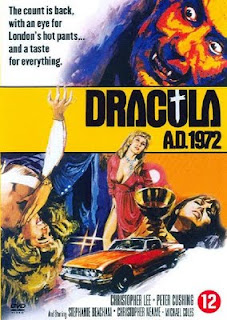 Mr. Needles and I have much in common, but our tastes in films often differs. I like musicals and wise-cracking dames, as well as the work of Will Ferrel and Steve Carrel (Elf and 40 Year Old Virgin are works of genius!) Where as Mr. Needles has the attention span of an over excited kitten, so he likes Hammer movies and ...... well, that's about it.

As we have a few events coming up in February - his birthday, our wedding anniversary, and of course, Valentines Day - I've decided to make something for him, as he complains all the time that I don't make enough for him. But what? I don't have time to do any serious tailoring, and I have to be able to make it without him noticing (not hard - I made my wedding dress practically under his nose and he didn't notice). Maybe this - he'd love the devil cape: 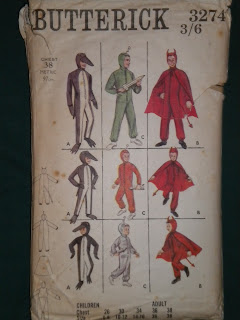 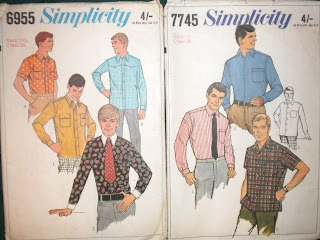 Or these swinging trousers: 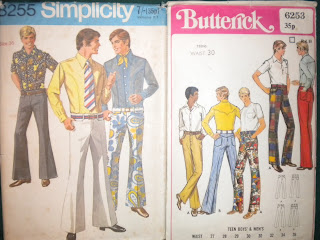 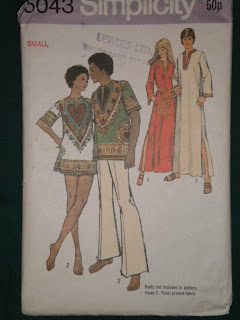 None of these are really going to work, as they all appear to be sized to fit teenagers - 36" chest! That would fit me! So I'm going to look to his film taste for inspiration. He particularly loves swinging London horror movies, like 'Dracula A.D. 1972' - full of dolly birds, kinky boots, pop groups, sports cars, and a particularly suave young gent called Johhny Alucard (see what he did with his surname?), who raises the Prince of Darkeness from his lair to go rampaging across Chelsea. 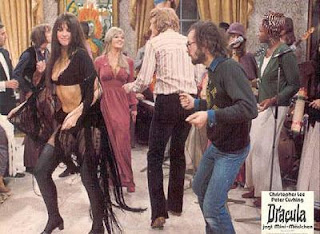 I think a shirt will be the most fitting (and easiest!) item to make. But not just any old shirt - to give it that swinging feel, I'm going to copy one of his favourite shirts:
﻿﻿ ﻿﻿
This is a Ben Sherman shirt which he wore to our wedding. The high collar stand gives it a really 60's/70's feel, but it's still quite wearable without looking 'Austin Powers'. As he had it tailored to fit perfectly, I'll make a sneaky paper pattern of it so it comes out just right.
(For those of you who might not know, Ben Sherman is/was a brand of shirt popularised in the 1960's and 70's, and beloved of Mods and Skins ever since. It was a British interpretation of calssic American Ivy League styles, hence the button down collars and the distionctive button at the back of the collar)
But what about the fabric? I trawled Ridley Rd market, and ended up at my usual Dalston Mill Fabrics , where I found this beauty: 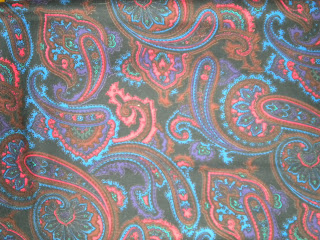 It's a wool mix twill, with some really rich purples and reds.