If you head over to New Vintage Lady, you'll see that she has launched Make and Mend 2011. I haven't done any sew-alongs yet, and I thought this was an ideal one to join.


I just had a bit of a wardrobe clearout, and found so much stuff I forgot I had - shameful! I'm not religious or anything, but I have a natural feeling of guilt for owning so much, and not even using it. Does anyone else feel this way? I'm not one of those throwaway people - I have cheap £4 t-shirts that I've worn for over 5 years - but I also love new stuff. I can't justify adding to my wardrobe when there are items just languishing there. So this month I'm not going to buy any new fabric or knitting wool, and try to re-model some of my old stuff.
With this in mind, I got together with my oldest friend in the world, Isabel, and we had an afternoon of drinking tea, sharing projects, and re-modelling some old bits and pieces. We got a bit carried away with the chat, so I kinda forgot to take any pictures, but this what we did:
A great afternoon was had by all, and it was great to take old pieces and breathe new life into them. It was like getting new clothes!

As well as this, I've mended the closure on a black Marc by Marc Jacobs skirt (which I've been wearing for at least 6 years) - this is a real achievement, as I hate mending. And I've knitted 2 hats out of oddments of wool: 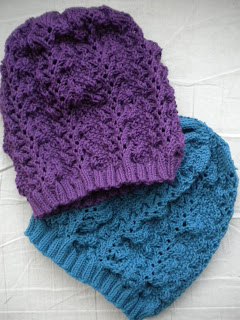 I Never Knew That (Its Got Nothing To Do With Sewing)

I was catching up on blogs the other day when I discovered something which totally took me by surprise. If you visit the Selvedge Yard, there's an excellent post regarding Jayne Mansfield's marriage to Mr Universe, Mickey Hargitay, and some quite fabulous images of the pink palace they shared in the 1950's. As with so many starlets, what seemed so idyllic ended in divorce and recrimination, and later Jaynes' tragic death at the age of 34.
Here comes the intriguing bit - as I perused the comments, I noticed someone mentioned that Jayne would be proud of her daughter, Mariska. Where had I seen that name before?
As a big fan of crime dramas (my husband is quite worried about the amount of CSI that I watch), I remembered the name from 'Law and Order SVU'. Jayne Mansfields' daughter plays Olivia! Why didn't I know that?! Am I the last one to find out? When you compare the two pictures above, the resemblance is quite noticeable.

That's it really, just wanted to share that fabulous bit of trivia with you.
Posted by Nicole Needles at 01:25:00 3 comments: 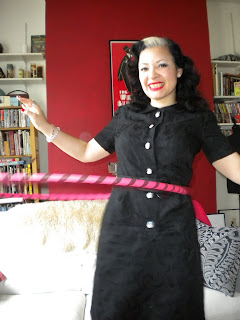 This dress would have been completed a long time ago, if only I hadn't been slowed down by belt buckle problems. I just couldn't find one I liked. I wasn't asking for much - 1" wide, black plastic, it didn't have to be particularly special, as long as it had a metal pin so it stayed buckled. Could I find it? It was like trying to find rocking horse poo. 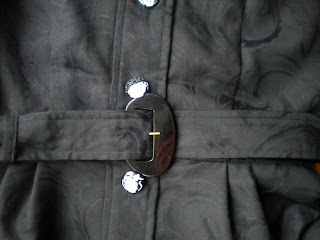 I settled on the one you see above, though I think it's a bit big. I can always change it later......

Here are some highlights from making it -
No zip! I've never made a dress with a placket at the front, but I'm really pleased with the way it turned out. And it shows the buttons off beautifully:


I reinforced the split at the back with a little arrowhead. I should use these more......
Over the years, I've become fussy about the inside of everything I make. I find it hard to just 'run something up'; I can't leave the insides alone! I try to line everything; on skirts I usually bind the hems; on dresses I also bind the waist seam; and I use French seams wherever possible, just so it's neat and tidy on the inside. (Maybe I'm a bit OCD......) The result is this:

Though I'm happy with the way it looks, and it feels lovely to wear, it means that a dress which was meant to be something I could just 'throw on' is now a bit too special. Don't get me wrong - I'll wear it as much as I want - but I need to stop being so meticulous because it's slowing my output down!
Here are some close-ups of the belt: 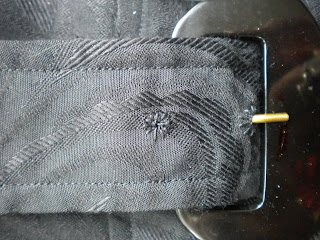 I've never made one before, so really I just made it up as I went along. A stiff interfacing gave it some substance, then after it was stitched and turned right side out, I bound the holes for the pin with buttonhole stitch.
Finally, the dress has shoulderpads, which I thought was bit unusual for a dress of the 1950's. Wasn't the New Look all about round, natural shoulders, a departure from the square shouldered 1940's? I toyed with leaving them out, but decided to follow the pattern faithfully, so put some lightweight, rounded ones in. I didn't think they'd work, but they actually create a nice line.
Posted by Nicole Needles at 01:04:00 11 comments:

The postman delivered a lovely surprise for me today - a prize from Wendy at the Butterly Balcony! Inside was a beret crocheted by Wendy herself, as well as a copy of 'Stitchcraft' from 1937.  It was beautifully wrapped, and she'd even included some spare wool in case I wanted to sew the bow on the beret in place. How thoughtful!

I had the day off, so I chose a top to complement it, and wore it all day. Here are some pictures: 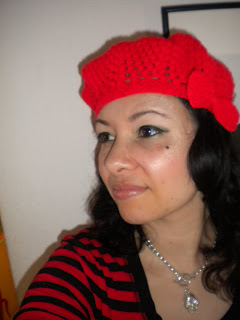 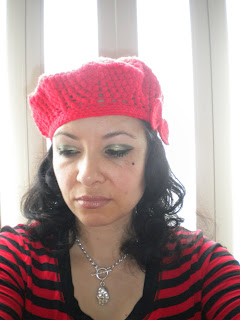 Now I'm over 50 followers, I'm going to have to think of something to give back - giveaway coming up soon!
Posted by Nicole Needles at 21:42:00 5 comments: