From Lumpy to Lovely

My home is in disarray because Mr Needles and I have decided to re-decorate, as we want to sell up someday soon, and as a neat freak/control freak, I find it a bit hard to cope with everything being all over the place (where did all of these shoes come from?), so I need stuff to take my mind off of it.
I bought this jumper last year from a thrift store in a Miami suburb. I can't remember the price - maybe about $5 - and even though I wasn't quite sure about it at the time, I thought how bad could it be ...... because it has HUGE SILVER SEQUIN BOWS ON THE SHOULDERS !!!!!! -
Judging by the label (below) and the feel of the fabric (pure, luxurious acrylic!) it looks like it's from the 80', maybe late 70's: 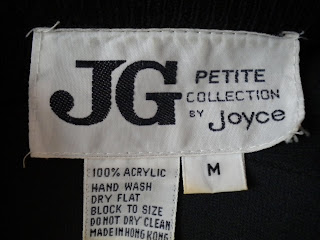 But when I tried it on, it's just a big shapeless thing with these big sequin lumps on the shoulder. Not one to be put off, I decided it would be much better as a little cardigan. I've noticed how vintage knitwear from the 50's and 60's is often faced with grosgrain ribbon along the buttonholes and buttonband.

With this in mind, I went off to Ridley Rd market for 3 m of black ribbon (total : £1.98) and then set about making it much less lumpy!
First, I found the centre front and ran some tacking stitches along this line. I also undid a few of the sequins at the neck and secured them with pins, to be re-stitched later: 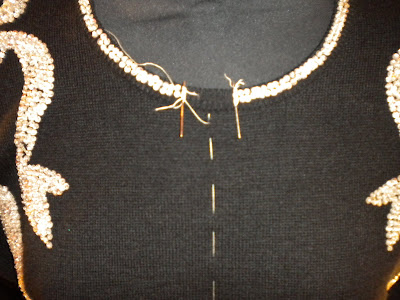 Next, I pinned a length of ribbon each side of the centre front tacking, on the wrong side of the jumper: 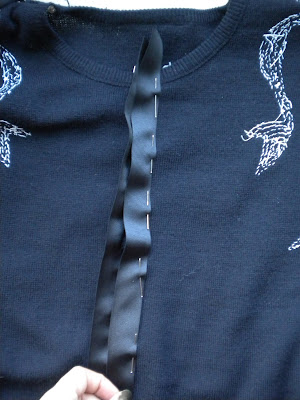 This was stitched in place, then the jumper was cut along the tacking stitches.Then I folded the ribbon around to the front, and stitched it back down: 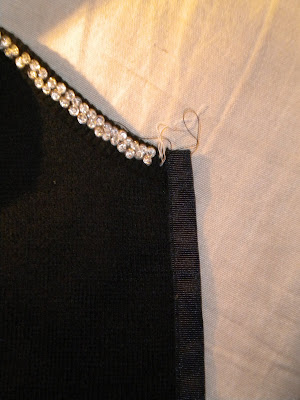 I tried it on at this stage; the length is still a bit too long, and unflattering. I pinned ribbon about 4" from the bottom edge, and did the same as the front.
And voila! 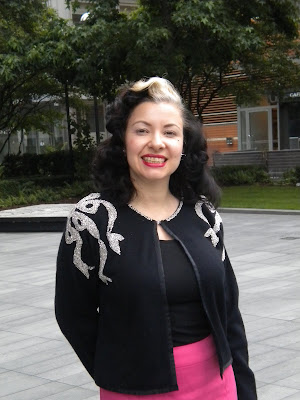 Now it's more like a little jacket. As I'm a bit lazy, and I'm not that keen on the buttonholes my machine makes, I decided to just fasten it with a little crystal button at the neck. 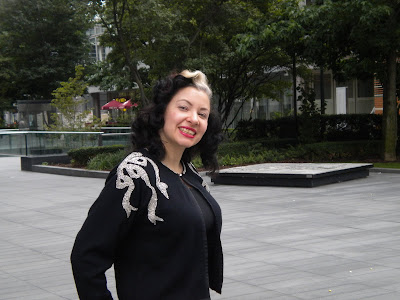 I took these photos a little while after finding out that Amy Winhouse had passed away. Such a shame. Shooting stars shine brightest.

Email ThisBlogThis!Share to TwitterShare to FacebookShare to Pinterest
Labels: buttons, Make do and mend, ribbon, sequins 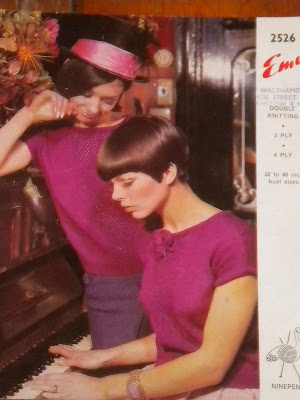 I made the jumper in this pattern a little while ago, and have worn it loads of times since. But there were a few mysteries on this pattern, which I've been attempting to investigate.
Number 1 - 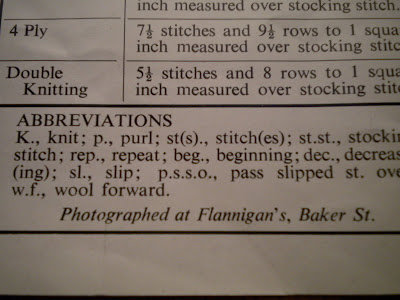 I noticed this photo caption on the inside cover. It's this picture which drew me to the pattern in the first place - where was this crazy swinging 60's haunt, and was it still there? I had dreams of being able to re-create the photo. After some searching on the web (it's actually spelt Flanagan's), I found out it was a well known restaurant at 100 Baker St, seemed to be known for it's steaks, and is even mentioned on the website for Focal Point, a group based in Liverpool in the 60's, who hung out there when they were in London. Imagine - I was getting more and more excited about visiting!
But it was not to be - Flanagan's is gone, and is now a branch of a popular pizza chain. Oh well......
Number 2 - 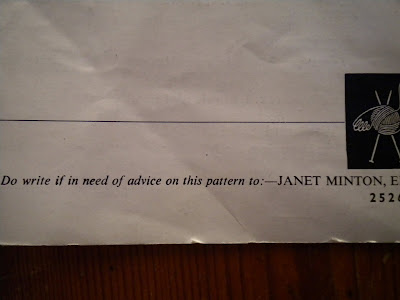 I noticed this on the back of the pattern. It's something I've seen on loads of Emu patterns, ranging from the 50's to the 70's. Who was Janet Minton? Was she an all knowing knitting goddess, who could answer any knitting query? Or was it just a name used by a group of people at Emu, to give the impression of a personal service? When you Google the name, you just get more pictures of Emu leaflets, but no info on the great lady herself (I assume she is great - she must be if she can answer all knitting questions!)  Does anyone know anything about her?
Posted by Nicole Needles at 01:59:00 4 comments:

The other Friday, I got home from a hard day at work to find the most brilliant parcel waiting for me. It was covered in stickers of all my most favourite things, even a picture of 'Meet Me in St Louis', one if my favourite movies: 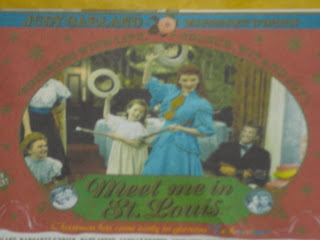 It could only be one thing - my swap partner parcel fom Liza at The Vintage Knitter! And it did not disappoint!

All of the gifts were beautifully wrapped, stacked up in a little pile; one even had some lilac ric-rac trim (I love ric-rac; I should use it more...): 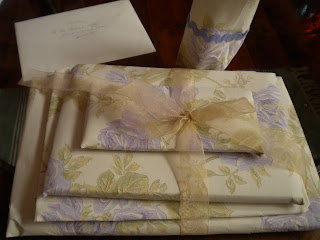 I greedily tore them open, to find these lovely things: 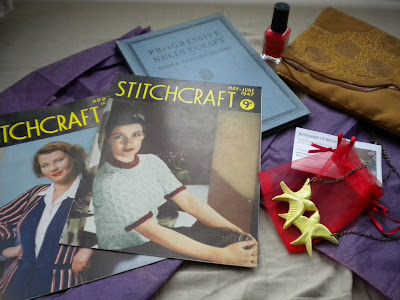 All the best-est things in the world - 2 Stitchcrafts from the 1940's, a great coral nail varnish from Barry M, , a beautiful 1930's purse, a book full of great sewing diagrams (I love a good diagram!), and best of all, a great swallows necklace, made by Liza's own fair hand. Be sure you check out her work at Buttoned Up Betsy - her prices are so reasonable, it would be a shame not to.
I've worn the necklace quite a bit, it goes with everything: 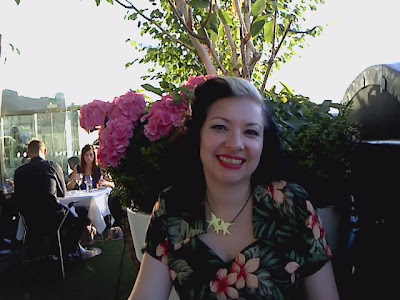 I'm 3/4 of the way through my parcel for Liza, but the bar has been set so high, I don't know if I can meet these levels of wonderful-ness. It will be winging its way to you soon!
Posted by Nicole Needles at 12:56:00 3 comments:

In my last post, I had started to re-model the dress above into an a-line skirt. I sliced the bodice off, unpicked the waistband, cut a new waistband from the sleeves, and used the pattern below for some snazzy new pockets: 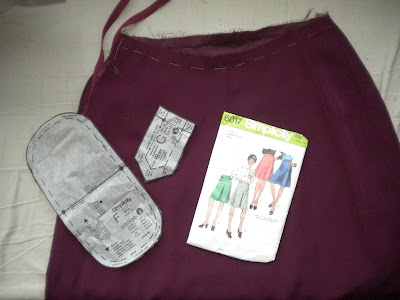 And here's the finished product: 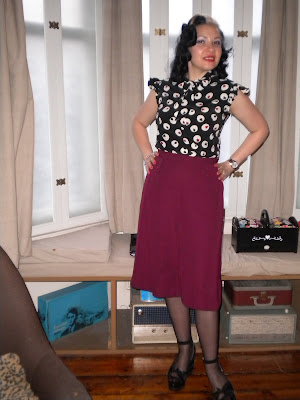 It has a sort of 1970's secretary feel to it, like Jane Fonda in '9-to5' (love that movie!).
It also reminds me of something Emma Pilsbury from 'Glee' would wear. That's why I teamed it with the pussycat bow blouse and wore it to 'Glee Live' on Thursday:
I had a thoroughly good time, and I don't care who knows it!
Posted by Nicole Needles at 23:28:00 5 comments: