...And failing. Big time. Even though I spent my first 14 years in California, I am hopeless in hot weather. In fact, hopeless doesn't even begin to describe it. I bloat up, and moan about it like a teenager. I feel like an internal sweat tap gets turned on and left to run endlessly. My make-up runs down my face. My hair frizzes. Overall, not a pretty sight. 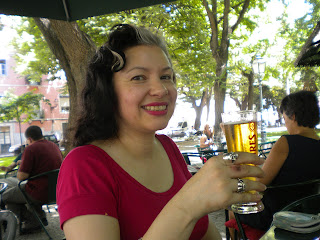 Despite this prior knowledge, and also being gripped by Olympic fever, Mr. Needles and I headed off last week to Lisbon, where everyday was at least 30 celsius (that's roughly 1,000,000 fahrenheit) And it was BRILLIANT!

This was the second time we visited this amazing city, and this time we did it even better. I think what I love most about Lisbon is the fact it still feels like a secret, undiscovered destination, relatively unspoilt by hordes of tourists and commercialism. Whether this is a conscious effort on the part of the Portuguese to limit outside influences on their city, or just the result of sellf imposed isolation as a result of political history, I don't know. But there aren't many European cities where you can find shops in the centre like this:


Here's a quick run through of other cool stuff to do in Lisbon (If you don't like other people's holiday snaps - well, you've been warned) : 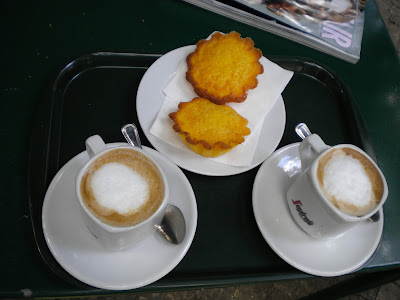 You're never more than a few paces from a pastellaria, where you can get coffee in various formations (always strong), as well as lovely custard cakes. Every park and square seems to have a kiosk with a few tables where you can while away the hours.


Have a cocktail in the Chinese Pavillion:


Or if you prefer, have a pot of tea! 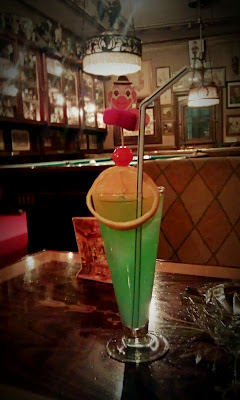 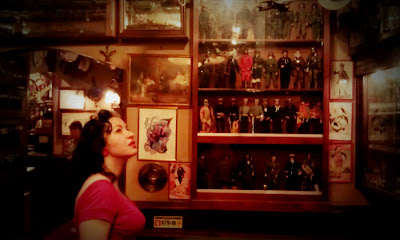 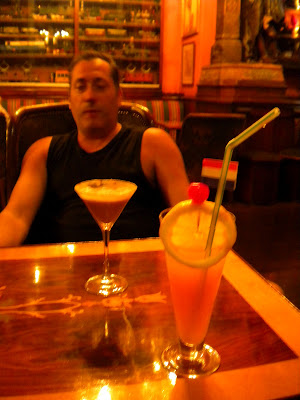 This is the most fantastic bar I've ever been to! It's like walking into the house of a very organised hoarder. Room after room is filled with loosely themed collections - toy soldiers, military hats, toys, statuary, porcelain trinkets. You name it, there's a cabinet full of it. There's a never ending menu, with cocktails and exotic teas, and even a couple of pool tables in the back room, so something for everybody. A lot of on-line comments mention the expense of this bar, but I really didn't think it was that bad, and considering the time and effort put into the displays, I think it's worth every penny. 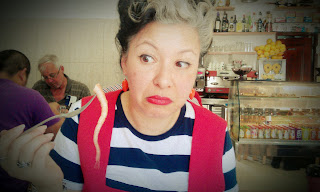 Besides gilthead and octopus, I also stuffed myself with sardines, clams, squid, and stingray, and I loved it all.


Admire all the beautiful tiles - 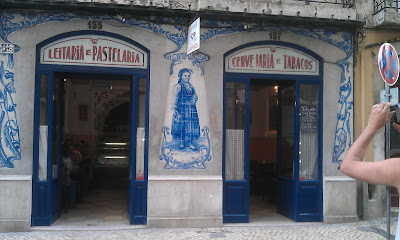 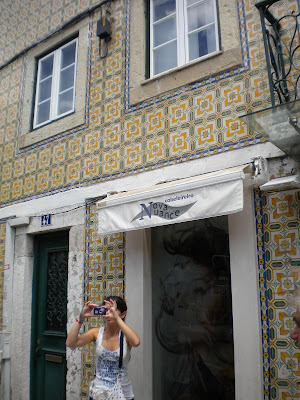 Tiles - 'azulejo' - are everywhere, not only inside, but on the outsides of buildings, covering whole facades. I particularly liked some of the mid-century examples, like this panel outside a shoe shop: 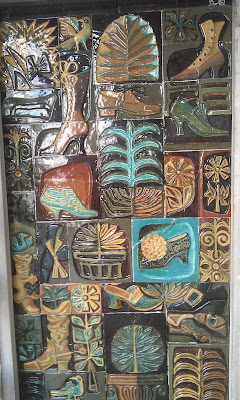 The subway also has some beautiful modern examples. This was my favourite one, at Cais do Sodre station, a busy station at the port, hence the big Alice and Wonderland rabbits, checking their watches: 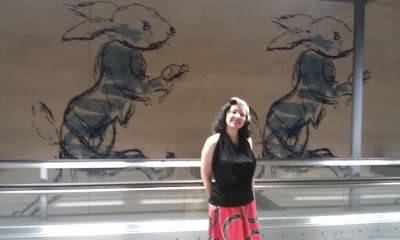 
It's a really touristy thing to do, and the gangs of people with cameras probably get on the locals nerves, but the 28 tram is the closest you can get to a rollercoaster disguised as public transport. Lisbon is hugely hilly, on a par with San Francisco, and like that city, it has trams and cable cars to deal with it. The 28 is brilliant, in that it runs from the peaks in the east of the city, through the centre, and out to the west. 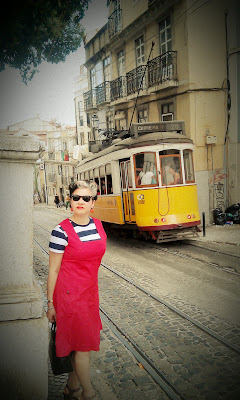 The route in Graca, to the east, is the best part - the tram belts along tiny little streets that it just about fits on. You skim so close to the houses and shops, you can put your hand out and pluck a sardine from a dinner plate!


Bairro Alto is similar to London's Shoreditch, in that it's a once rundown area which has been transformed by little bars, restaurants, and shops. But where Shoreditch has become over run by binge drinking hipsters braying loudly from every corner (that's just my opinion), making it a bit of a young person's ghetto, Bairro Alto manages to keep a balance between young and old. I saw gay and straight, students, families with children, all out having a good time, with little hint of trouble that usually comes with these situations. You can go in one bar and jump around to techno, or go next door and listen to mellow jazz and drink pina coladas. There were even police out having their photos taken with visitors!


Some of the bars and restaurants are tiny, most the size of a small living room, with just a few tables and chairs. Our favourite was Boca do Inferno, a punk/metal bar with a really friendly owner and great decor: 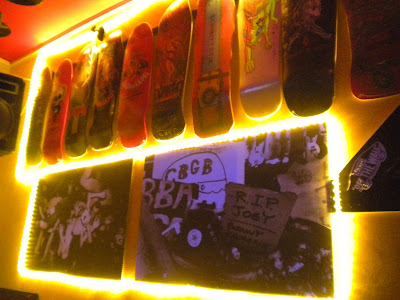 I think that's enough for now. We did loads more - a day in the mountains of Sintra, walking along embattlements built by the Moors; we ate great ice cream; we even spent a day at the seaside.


I always have trouble finishing off posts, so I'll leave you with a picture Mr Needles took of me knitting on train coming back from the beach - any opportunity to get a few stitches in! 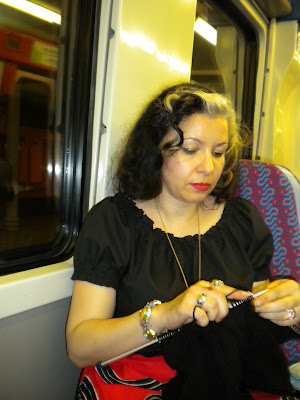 My Family - Sewing and Crafting Through the Generations

Mr Needles and I just came back from a weekend at my parents house, where I spent most of my time wandering from room to room, noticing how much of it was home made. After all these years, I suddenly noticed that it was easier to pick out the pieces of furniture, soft furnishing, and other decor that my parents DIDN'T make, than to count what they had a hand in creating. And I felt quite proud!


There's loads more, but my camera ran out of battery!

It just got me to thinking that this is probably why I think nothing of making stuff. I'm more comfortable with fabric based projects, but I don't mind turning my hand to painting, changing fuses, filling holes with plaster, and so on. My sister's also pretty handy - she has redecorated her flat practically on her own, and a beautiful job too! She's also a pretty skilled crocheter. Growing up, we were always taught that there was no such word as 'can't' and that lack of funds should never hold you back from having nice surroundings and clothes, as long as you had imagination and a willingness to try new things.

As is often the way when you visit parents, the old photos came out, and I noticed even more evidence of our home made life:


So it's pretty obvious that with that amount of handiwork going on around me, it was a pretty sure bet that I would be sewing and thrifting as an adult.

And it goes back even further - this is my maternal Grandmother, in 1942, in a dress she made:
I never met her, but she looks like a stylish lady. Like my mum, she made most of her clothes, and clothes for her family. (In fact, I seem to remember learning to sew at age 11 or so on her old Singer machine.) Of course, home sewing was the norm in the 40's, and these skills were obviously passed on to my mother in the 50's and 60's. Then my mother got me started in the early 80's. She was never dictatorial about it, but instead encouraged us to experiment and learn what worked through trial and error. By the time I left home at 18 to go to college, I made sure the first thing I bought was a second-hand sewing machine and I found out where the fabric shops were in my new town!

I don't know if my handiwork with a needle is a freaky genetic disposition that runs through the ladies in my family, ot if it's just a case of being lucky enough to have been exposed to it at an early age and taking to it. Whatever the reason, looking at these photos, I can feel the decades of experience moving through the generations.

I'll leave the last word to my Dad, who in a family of women sometimes has to fight to be heard: