What I Did on My Holidays - The Voodoo Sewing Box 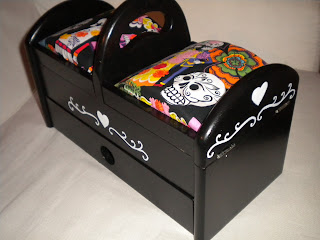 I recently had some holiday to use﻿﻿﻿﻿﻿﻿ up from work, which I intended to spend at home 'achieving' things, but mostly spent my days watching old movies and repeats of CSI. But I did complete one project I'm proud of - the Voodoo Sewing Box! 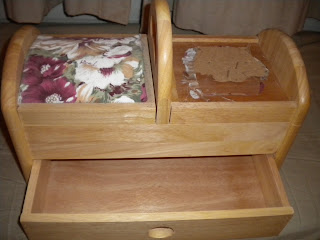 My mother in law had the box above (something she picked up at a jumble sale) and kindly gave it to me. It has a 2 little lids on top, with foam pads covered in fabric, and a little drawer underneath, as well as a handle for carrying. I thought it would be great﻿, as I don't have anything nice for my sewing bits and bobs; most of it languishes in horrible plastic boxes and bags. 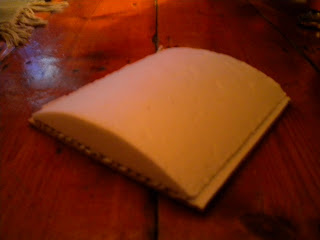 Initially, I was going to leave it in it's original state. But the more I looked at it, the more I thought it was too bland for me. So I attacked it with a screwdriver and pliers, and wrenched off the pads. (above) 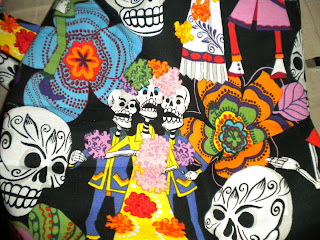 Then I dug out these scraps, left over from a shirt I made for my husband. Got my hands on my husbands staplegun, and covered the pads with it. 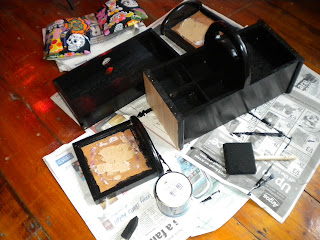 I thought that would be it, but the fabric was way too wild for the box in its original state. That's when I decided to make it into something that resembled a sewing box crossed with a Gypsy caravan, with a dash of rock 'n roll! I got some cheap paint from the local hardware store, and after giving the box a light sand, I put a couple of coats on it. 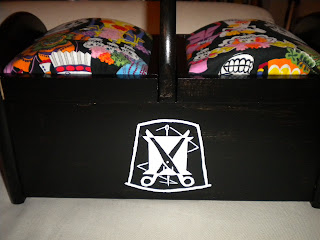 Then to add some Gypsy elements, I painted the Nicole Needles symbol on the back, and some naive hearts and scrolls on the front and sides. 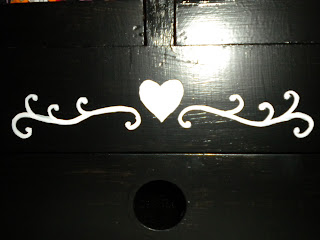 A light coat of varnish to protect it, and it's done! 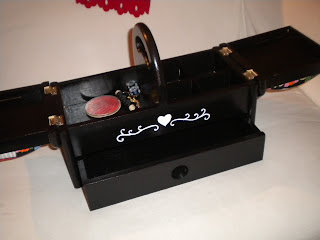 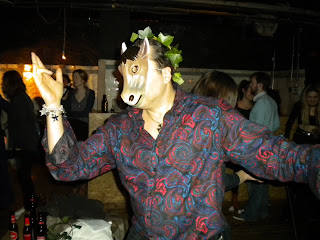 No, that isn't some crazy performance artist, but Mr Needles getting in touch with his inner Pagan at the excellent Night of the Long Swords on Friday 12th of February, here in London town. And where did he get that excellent psychedelic shirt from, you say? Why, it was lovingly crafted by me, Mrs Needles! (see 'I Married a Psychedelic Vampire') 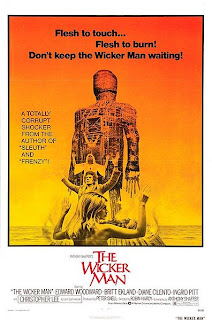 Let me explain : one of Mr Needles all-time favourite films is 'The Wicker Man', a looney horror-meets Scottich pagans- meets weirdy beardy folk musicians movie from 1973. It features Christopher Lee (always a sign of quality), but the main reason it has such a following, especially among men with a taste for 1970's dolly birds, is that it features Britt Ekland as a saucy barmaid. At one point in the film she perfoms a notorious dance as she tries to corrupt the virginal main character, played by Edward Woodward. This, and the fact it features orgies and a cameo by Ingrid Pitt, has ensured the film a large cult following.
So when we found out there was going to be a sing-a-long showing of the film, we decided we had to go. And I had to rush to get his shirt done and surprise Mr. Needles with it, as I figured he'd want to wear it. The event was brilliant - it's like those Rocky Horror film events, where you sing along, and at certain points in the film interact with the events on screen. In this case, it involves eating frog-shaped sweets, making crucifixes out of sticks, and slapping your buttocks during the naked Britt Ekland scene. Everyone dresses up, including the hosts, and you were nobody if you didn't have an animal mask!
As for the shirt, here are some highlights:

I made the pattern by copying Mr. Needle's original Ben Sherman onto newspaper, one of the most frustrating experiences of my life, as I had to do it quickly before he got home from the gym! 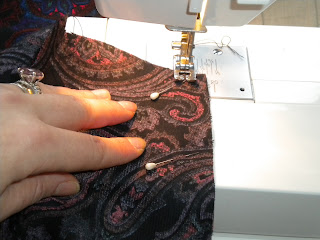 I
t was a beautiful fabric to work with (a lovely wool mix twill) and it was the first chance I had to work with my new pins, which were a Christmas gift.
The collar was really pointy, and involved cutting really close to the stitching, which always freaks me out, but it turned out quite well.


﻿It was the first time I'd done a button-down collar, which was a bit scary at first, as I was worried I'd place it wrong. But I copied the placing on the original Ben Sherman, and it seemed to work. It was also the first time I'd done a proper button band, which took a bit of calculating and twisted my head up in knots, but eventually became clear, and turned out ok, as you can see from the picture. 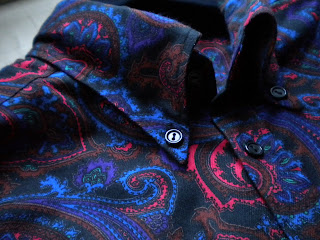 And finally, the cuff and sleeve opening, which I admit I was a bit lazy about, and just did a continuous placket, rather than one of those fancy overlapped plackets with a button, which you usually see on men's shirts. This version is a bit girly, but Mr Needles didn't seem to mind! 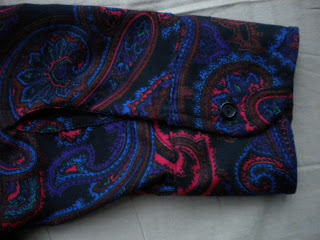 I really enjoyed making this shirt - it took much less time than expected - but don't tell Mr Needles or he'll expect a new one every month!
Posted by Nicole Needles at 18:01:00 1 comment: